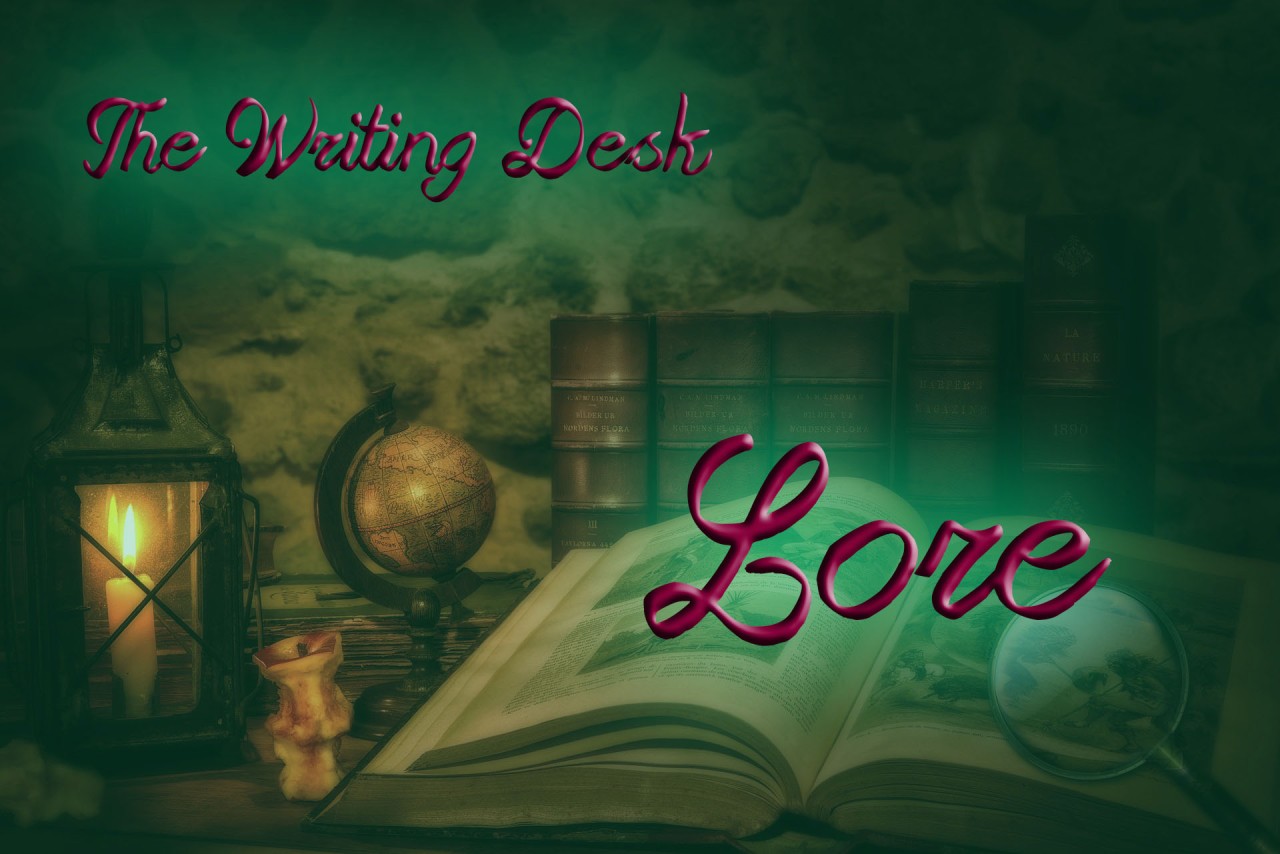 The Deathly Hallows. The One Ring. The Heart of Te Fiti. One of the funnest things about diving into a good story is getting to explore the culture or cultures, and one of the most important part of culture is lore.

Imagine someone you don’t know, a total stranger. They have dark hair, amber eyes, medium skin. Maybe they’re average-looking, well groomed, dressed according to the style of the area and era where you live. Not much about them stands out to give you an impression of what kind of person they are, how old, how well off, political affiliation. Now this person reaches for something and the sleeve of their jacket pulls back and you spot a tattoo on their wrist: HAKUNA MATATA.

Instantly, you know something about this person. Disnerd, possibly literature nerd because we all know The Lion King is a gateway drug to Shakespeare, Millennial (assuming you’re not good at guessing ages, or think ‘Millennial’ applies to all young people), probably a pretty chill person. After all, Hakuna Matata, as we all know, means, ‘no worries.’

This person, by the way, is real, though the tattoo is on his elbow. He’s a barista at my local Starbucks. While I think he’s adorable anyway, the Disney interest is an instant connection, because I too love Disney. Another barista I’m casually acquainted with has ‘Ohana’ on her (I believe it is) wrist.

The politics of billion-dollar mega-corporations aside, Disney is a big part of a lot of the lives of people alive today. It’s hard to find someone who hasn’t been touched by Disney or a franchise that they own, and each franchise, whether theirs or one they acquired, adds to the canon, or their lore.

Lore, as I define it, is a segment of a culture that serves to entertain, teach, or inspire the people. I would classify it differently from mythology in that I believe that mythology falls under Lore, along with works of fiction. The main distinction being that many people believe mythology of a religious nature to be factually true, and its inherent provability doesn’t change that. To phrase it differently, I’m not here to debate whether or not pagan myths or the Bible are ‘true’, but the fact that they are stories used to teach, inspire, and entertain put them under lore, along with theatre and fictional storytelling. It’s the STORY and its impact on the culture that affects the classification, not the legitimacy of the story.

So yes, I would put Hades and Persephone, the Book of Genesis, and Harry Potter under the same umbrella, because they’re stories, rather than such things as technology, systems of government, languages, etc, though they do certainly affect those things, as well. Everything is interconnected. Isn’t anthropology fun?

But because they’re related, we can examine fictional lore much in the same way we can study religion. In fact, there are a number of indisputably fictional religions that are recognised officially: Dudeism, the Seven, Jediism, Pastafarianism, to name a few. So, it counts.

In order for something to be defined as a religion, it must fulfill 5 requirements:

I would add that lore also provides history and entertainment. The story of the Deathly Hallows isn’t just a way to tie up a couple loose ends in the story, it gives a lot of background on the Wizarding World that doesn’t necessarily relate directly back to the main plot.

The story of Wakanda and their worship of the goddess, Bast, and the Heart-Shaped Herb provides meaningful insight into the plot of Black Panther, while also adding a layer of culture that makes Wakanda feel more real.

And that’s really the goal here. We, as writers, want to make our worlds feel more real, more lived-in; while you, as readers, want to feel like you could step into the world and explore.

I remember a debate a friend of mine and I had once about the Prisoner of Azkaban film. I hhaatteedd it (still kinda do) because it deviated so sharply from the book in a lot of ways that I felt were fluff and distracting from the plot and just generally a big flashy waste of screentime by a director who was trying to distance himself from the style of the original director in the most ostentatious posturing imaginable. However, she LLOOVVEEDD it, and her logic was that while the first two movies captured the wonder and amazement of the first two books, the Wizarding World felt a bit shallow and a bit plastic. The darker tone, the little flourishes and grit and grime that made Diagon Alley, in particular, feel a lot older, like it really was thousands of years old, and all manner of humanity had passed through. Like the first two were meant to impress us as viewers, whereas the ones that followed were meant to portray the world through the eyes of the characters who lived there.

In short, they had done more with the lore, had given it some depth. It was saying, ‘we don’t just have the Knight Bus and Dementors, we also have Caribbean-accented shrunken heads. That’s something that we have that you didn’t know about and that has no bearing on the story. But that’s fine because it’s worldbuilding.’

So, when you’re dealing with a fictional world, it’s not enough to describe the events of the story, the characters as they appear, the settings they encounter. Lore includes relevant events in history, superstitions, literature of the world, religion, etc.

For instance, my character, Alois, is an ex-soldier. He served in a conflict called the Ettin Wars that started about 7 years before the story takes place. Human encroachment into the mountains where the ettins lived, forced the ettins into the valley floor, where they encountered and fought with the humans there. The army entered into a number of engagements to push the ettins back into their own territory. The kingdom of Viehland (where the story takes place) had called to their neighbours, the kingdom of Vurdia, for help, but Vurdia, unbeknownst to the majority of the Viehlish, was dealing with its own internal struggles, so they couldn’t provide aide. This led to widespread resentment toward the Vurdence on the part of the Viehlish.

Then there’s The History of the Faithful, The Balcony of Tears, the Independence of Inchiajua, etc etc, not to mention the origin of magic in the world and why the poor believe in it and the rich have turned to science. It’s a Whole Thing.

So the next time you see a Superman tshirt or someone wearing a cross on a necklace, have a think about how the stories we tell affect who we are as a society and as people.

What’s your favourite myth or legend, from the real world or fiction?